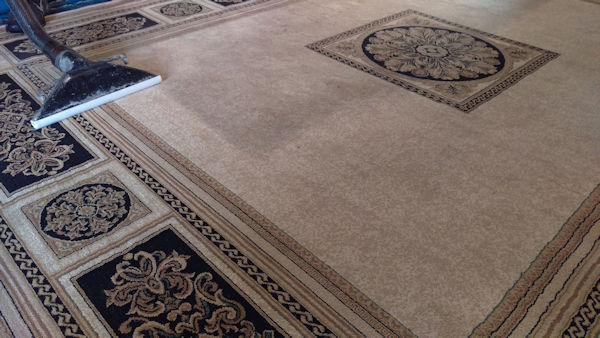 Carpet Cleaning Services | Can We Help Teach You?

Carpet cleaning Tulsa since 1998. We’re continuing our podcast topic on keeping your commercial Carpet Cleaning Services. So for your business, your office, your place of work, cleaning Tulsa since 1998, we are complete carpet. So give us a call today, (918) 494-7093. And enjoy your carpet again. Get on the road, you having your TESL, the, your home and this case. We’re talking about your office. So we just did a couple of businesses. We’ve actually done a lot of businesses as last week, currently working on a business. Now this one’s more of a, uh, construction, um, industrial type business. So there’s a lot more grease in mud. Uh, two that we did yesterday, one was a church. So they had actually a baptismal. They had moved and it had splashed water out while they were moving him. And so by flushing the water out that water spill fell on the floor and you get this big Brown spot on the floor.

Now you may wonder, what is it, how do I get these big Brown spots by doing this? And this is from, this is where you get the common question, because it happens all the time. Why do I get these Brown stains when I do Carpet Cleaning Services or not carpet laying when I get water in my carpet? And so this happens typically with carpet that’s, Oh one to, you know, 20 or 50 years old. Anytime you’ve got any, if you’ve got an, uh, an entry mat and you take that instrument after it’s been out for six months and take that instrument hanging over a fence, or to stand it up and then hit it with a broom. If you take that instrument, throw it over the fence and then hit it with a broom. You are going to see it just to come flying off of that instrument because that’s, it’s doing its job.

It’s supposed to be there doing its job is to collect dirt and debris. It’s like a wastebasket and it needs to be emptied on a fairly regular basis. We may use a vacuum and that will suck all the dirt and debris out of the carpet. We may use a Carpet Cleaning Services and that’ll start suck the dirt and debris out of carpet. There’s many different processes and avenues that we can use to get the dirt out of the carpet. But the main idea here is that you get the dirt back out of the carpet. Now, knowing that that dirt is in the car, but we know that if we clean the carpets or if we, um, uh, vacuum the carpets, you’ve got a container there and it gets filled up with stuff. When we cleaned people’s carpet, that water runs through the carpet and it comes out and it looks kind of a muddy color.

It’s kind of a, depending on the area that we’re in right now, the one that I’m doing is commercial. So it’s gonna come out kind of a Blackish gray color, because they’ve got a lot of greases here that are coming in. So that’s the color of the dirt. That’s in the Carpet Cleaning Services. A lot of times houses come out more of a milkshake color, kind of a dark chocolate milkshake, I guess, a dark chocolate Brown, kind of a color because it’s picking up the red soil from around here, which is prevalent in our areas. And that soil gets down in the carpet. You mix it with water. You’re now got clean, clear water that is now mixed in a lot of soil. So now it looks like water. That’s running off your yard. Do you ever seen one running off your yard or running down in storm drain?

It’s typically kind of a brownie muddy color. And the reason is because it is cleaned the dirt and dust off of whatever it’s run across. So if you spill water into your carpet and you don’t suck it back out, we’ll all of that liquid dirt. That’s in your carpet that has now been liquid about liquefied by going through the Carpet Cleaning Services and into the water. It’s now going to say that this water that has gotten into the carpet is now muddy Brown, because you have muddy Brown water anywhere that water goes in, it dries. The mud has floated with the water to wherever it goes. So the dirt was sitting down below the carpet and maybe sitting down on the pad, sitting on the concrete or sitting on the backing. But once you throw a water through it, it now rinses a lot of that dirt and turns it into like we talked about for a chocolate milkshake and that milkshake, when it dries out, leaves, deposits the dirt, wherever the water was.

So now instead of being down underneath the carpet or on the concrete or in the padding, and now it’s floated up into the fibers of the carpet where it’s visible now. And so this typically is fairly easy to remove because it just means the fibers are dirty. That’s really all it is. They’re just dirty. And like, well, what, how do the water make it dirty? Well, the water itself was clean. It did not make it dirty, but there is Dustin dirt in the carpet that mixed with the water. And it moved the dirt from down below the carpet, up into the carpet. And this is where you’re going to see the difference in the carpet itself is that they’ve got that dust and dirt up. But now my side is that typically water brought it in water can bring it back out. So just a quick carpet cleaning normally will help to thoroughly rinse that out and get you back to square.

One, one of the other commercial jobs we did yesterday was we went over, clean up a, um, uh, got arena facility, but it was their showroom. And so they do have the office where they do all of their executives type stuff, estimates, talking with customers, picking up checks, laying out plans, and then they have the warehouse. And in this case, the two are very separate. So the warehouse and all of this, all of this dirt and debris does not come into the office area because it’s showroom ready. So it’s going to be more of a customer facing. So there’s that particular showrooms. And nobody goes out into the main office area. From there, everything that is in there came from customers as they walk in. So customers would come in. And so they’re more like a dr. Pepper spill. I get ready to spill some type of a drink or, um, things sitting there on the, on the Carpet Cleaning Services that was topical that got laid down or splashed out or hurt.

So that stuff broke down real easy and cleaned up quickly without any problems. Now, the one that we’re working on right now is commercial. And so that this one is going to take more time than others, because it is, um, Greece from a warehouse. And when you have breached from a warehouse, you have to break down that grease. And it won’t just clean out because it was clean out and they could back him out, but it’s not, it’s a greasy and sticky, and it needs to use a heavy degreaser to break that down into something that can be cleaned.