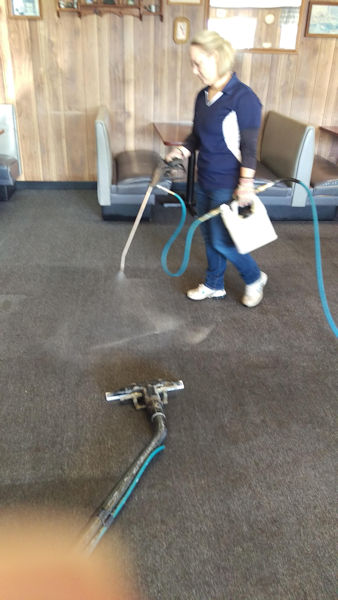 Speaker 1: (00:01)
Carpet cleaning Tulsa since 1998. We are complete carpet Carpet Cleaning Tulsa is in our fiber. Give us a call today at (918) 494-7093. We’re going to continue our series on patching and uh, this time, uh, we talked last time about the ways to patch a gave it went over. The main three-ways is one to use a steam iron to physically melt the glue and just seem that straight melt that glue straight in the back of the two parts of carpets. You can bring the two pieces of carpet together and make them firmly hold in place so it won’t come back out. You can use a microwave iron, which is a specialty perfect tool that can actually melt the glue tape, the same tape through the carpet. So you actually, instead of going under the carpet and melting it and then pulling it out and setting the piece pieces into the glue, you actually put the pieces together, assemble it.

Speaker 1: (00:46)
Also it looks perfect. And then iron from the top and then the micro barn goes through the carpet, melts the glue less the glue a seep into the back of the carpet. And the third way is using a glue gun. So you have seam tape down there that’s melted. Um, and then you put the put glue on top of it and that hot glue melts into the glue that’s already on the same types of bonds to the seam tape that way. And then that sticky glue that you put on there, then you press down and it goes into all those little pits and grooves in the back of the carpet to hold that in place also. Uh, so we’re gonna finish off with that one that, that one you have to be extra careful with those last pro tips we gave on the last podcast was do not get it too close to the edge, otherwise it will seep into the edge and pop right out. And we don’t want that. It looks like a gummy, gnarly mess. You want to put it back about a half an inch and as you push the seam, the patch down into that seam, you let that, we’ll squish the glue towards that edge. But you don’t want to glue right on the edge so it doesn’t seep out.

Speaker 1: (01:43)
And you also can get uh, ended up with areas that just don’t hold well if you get it out too much. So you want to have a good lot of times on a small patch. I’ll actually kind of do a box around the outside that slightly smaller than the outside and then I’ll do an X in the middle so that the middle, you know, kinda holds well to just get a good thing cause you are going to create a small square in the middle of the carpet and it’s going to become a point in time. You cut carpet, you try not, you put the least amount of seams in any carpet that you possibly can. That way you have less points that the carpet could fray or break or get worn out. You also want to try to put the seams outside of your walk path at all possible, but that’s when you’re putting new carpet in. Carpet Cleaning Tulsa.

Speaker 1: (02:22)
If you’re repairing carpet, that’s already is it in there? Well then all of those rules go out the door because right now the question is, do I have this big hole in my carpet where the dog, uh, dug at the carpet or chewed it up or do I have a patch to make it look better? So the option is do I have a big hole or do I put a patch right in the middle, my walk path? Well then there it’s an easy choice because you don’t want the hole in the middle of the patch will look much, much, much better. Even though it’s going to be a place that’s going to wear out over time, faster than the rest of the carpet because you’ve now put four cuts in the carpet. It doesn’t wear out as much as the damage that was already there.

Speaker 1: (02:59)
Uh, one thing to know, or that I’m patching, always use patching material from the carpet that you’re using. This makes all the difference in the world. Um, if you go and try to buy another piece of carpet that’s similar to the carpet you’ve got, it will not match. Even if I went to the factory and said, Hey, can you give me this exact carpet again? And they went and got me a piece of that exact carpet again. It will not match the carpet that was there. Cause carpet comes in dialogues. So they take the entire grouping of carpet and they put it all together. They uh, put one big, huge dialogue. They may do 10,000 yards, they may do 5,000 yards. Depends on what that run of garment, maybe just be a thousand, depending on what, how much of that carpet they expect to sell in the year.  Carpet Cleaning Tulsa since 1998.

Speaker 1: (03:41)
And so I’ve got, I’ve got so many different lines and colors and variations. There’s a lot of times they do it more on demand. As people start to use up a line of carpet, then they’ll remake a certain amount of it, but they don’t make up giant quantities because then they aren’t able to sell it if they can’t sell a certain line or it’s just not that popular. They don’t want to have a hundred thousand yards sitting on the shelf. They typically only do a thousand or 5,000 so it’s likely that they’ll sell. That’s also why a lot of colors get discontinued because they put it and have it on a shelf. They still got like 3000 left on the shelf. Carpet Cleaning Tulsa They haven’t sold it in a year. They quit making that particular carpet because it just doesn’t move. And so those carpets, each time they get made, they mix up the dye for that batch of carpet and it’s always, even if they make it mixed up exactly the same fabric always absorbs the dye a little differently each time you do it.

Speaker 1: (04:27)
So I’ve had times where we installed the carpet and it say it’s 200 yards of carpet. So you got this, you know, 150 yard long or 150 foot long roll the first part of that carpet and the last part of the car. But you do not want to seem those two pieces together cause they will be noticeably different. It may just be a half a shade, but the nut that your eye sees the variations between the two. So that being said, always tried to make sure that you use patching material from the carpet that already exists. So, uh, one thing that you can do to make this happen, say that you don’t have any patching material. You didn’t save any of the carpet from when it was installed. The, uh, one, uh, just go throughout. If you don’t have any of the extra things, just go throughout the house and find a place that does have the carpet that is not that noticeable.

Speaker 1: (05:14)
Uh, typically the easiest way is a linen closet or maybe a coat closet. Uh, maybe a small kid’s closet or a spare bedrooms closet there. You could go buy a carpet that’s close and it’s inside the closet. So it could be, you could even go with a slightly different color and as long as the door is shut, you would never see it. And if the door is open, you think, Oh, they’d just, it’s the either the old carpet in the closet or they decided to replace the new new closet carpet. And then you can grab that carpet, which is an exact match because it came from the same dialogue that is installed everywhere else. And use that as your patching material and then you’ll have a great patch that matches color wise. That’s a big thing to have is make sure that you match the color of the carpet so that the patch will give it the best chance that it matches him. Next time we’ll talk about texture and where, yeah. Carpet Cleaning Tulsa is in our fiber. Call us today 918-494-7093 https://www.completecarpettulsa.com