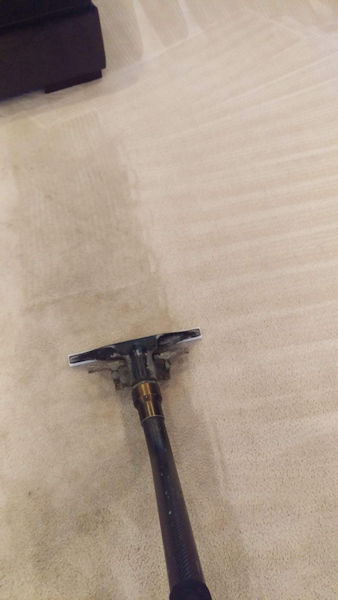 Speaker 1: (00:01)
This is complete carpet, Carpet Cleaning Tulsa since 1998 I want to give you a little episode today on pets and pet urine doing a customer’s house right now where the dog has been responding negatively to the construction being done in the home. The carpets themselves are not being affected by the construction, but the kitchen, they’re re renovating their whole kitchen. They’re pulled out all of the cabinets and all of the different accouterments throughout the whole kitchen area and they’ve now brought it all the way down just to the walls and they’re waiting on new cabinets, custom cabinets we built and made. But there’s some type of delay in the process. And so the dogs have reacted to all of the upheaval, all the kitchen stuff and being in the dining room, the kitchen being pretty much just laid out with a new tile. But no, no [inaudible] there’s no furniture, no cabinets, there’s no appliances, nothing in the kitchen. Carpet Cleaning Tulsa is in our fiber.

Speaker 1: (00:55)
Kitchen is just open and bare now, and I’ve seen this many times, Carpet Cleaning Tulsa since 1998 where you change up something of your house and for a while it’s disheveled or it’s changed up or it’s um, unrest, so to speak in the house and the pets will react to the unrest by a, I would call it vengeance P. it’s probably not the crime, the correct term, but that’s generally what’s kind of happening is that they’re going around and acting out sort of like a little child throwing a tantrum. They are going out there and they’re saying, well, I’m unhappy with the way things are going, so I will start doing stuff that I don’t normally do. They’ll start peeing. In this case, he started peeing in the kind of the living room, dining room area, and they’ll start chewing on stuff they don’t normally chew on them when they’re not a chewer.

Speaker 1: (01:41)
And now they’ve chewed up three or four sets of shoes. And so I would caution you as you go through these different times, if you look to do something big in your home to keep an eye on your pet, um, you can always call us to come in and try to help you to clean up the problem afterwards. But sometimes preventatively saying, Hey, this is what’s going to happen. I know there’s gonna be some unrest, some stress. Uh, one of the unrest and stress I see for pets where they will act out is if you go on vacation for a week and you are not there, even if you have a house sitter or someone that the pets are used to, if you are not there, they will miss you. And in turn a lot of times, which doesn’t make sense because to a human, I’d be like, Hey, I haven’t seen you in awhile.

Speaker 1: (02:22)
You’re my best friend. So I’m going to come over and I’m going to pee on your stuff. And you’re like, wait, what? Yes, because I’ve just, I really love you because you’re such a great friend and because I really care about you a lot and you haven’t been around lately. I’m going to pee on your stuff and you’re like, no, don’t, that’s not the right way to communicate friendship. Carpet Cleaning Tulsa And I think sometimes we don’t think about our pets in this way that they are going to act out in what we do. And so if you do go out, a lot of times people don’t have the money or don’t want to board their pets, but there’s many are smaller versions of boarding that you can do. Carpet are a susceptible area to being peed on my pets because it’s just more like soft dirt or ground and they just feel more comfortable going pee on that than they do on a hard surface.

Speaker 1: (03:10)
Like your tile floors, they can sometimes have accidents but a lot of times it’s more of that nervous turtle P sort of like chihuahuas. Do they have a, um, if they bark too hard or they get too excited, they can piddle in one place. Just it’s like an excitement type of thing. Sort of like a, Oh, I can call it also a pregnant P. so like, uh, every now and then an involuntary reaction from a heavy sneeze or laugh or you tickle too much and all of a sudden kind of just a little bit gets out, uh, pets or can be somewhat like that. But there’s also another side where they’re vindictive revengeful and they’re like, Hey, since you’re not here, you’re going to pee around the house. Um, Oh. I would almost equate it to like a teenager acting out knowing that they’re probably gonna get in trouble, but at least they would get in trouble.

Speaker 1: (03:54)
They’re getting attention and sometimes that’s, um, you know, I’ve just got a small rabbit in our house right now, but he’ll be in his Hutch and if we don’t let him out of his Hutch into his bigger playpen overnight, he’s in the Hutch. That way we don’t have to worry about him. And then during the day we let him out so you can kind of get around and play in his big playpen and during the night, if you haven’t come to get him by a certain time in the morning, he will literally, he’s got a, he’s litter box trains. Carpet Cleaning Tulsa We’ve got a little box sitting right there that he can use to go to the bathroom on. I’ll just kind of get up on it, sit on it, go to the bathroom buddy. He will literally reach down this litter box, which is bigger than him. He’ll reach down, grab it with his teeth and start banging it against the side of the cage because he was wanting somebody to come and get him.

Speaker 1: (04:40)
He’s annoyed that he’s been left in the cage for too long. It’s time for someone to come get him and so he’ll just start grabbing all the stuff in his cage and just kind of toss it around and throw it around and bang it against the bars and try to make as much of a noise and a ruckus as he can. And then somebody comes over there and all of a sudden he becomes, you know, he plays the docile like, Oh, it was um, I’m so glad to see you. I that noise. I don’t know, boy, I heard that too. Really seemed scary. Glad you came to rescue me from that terrible noise that was happening to here. Hello. How are you doing? As if the rabbit doesn’t realize that we know that he’s the one that has making all this ruckus just a few minutes ago. And I think that knowing this back end information is helps you to kind of preemptively know what to do things.