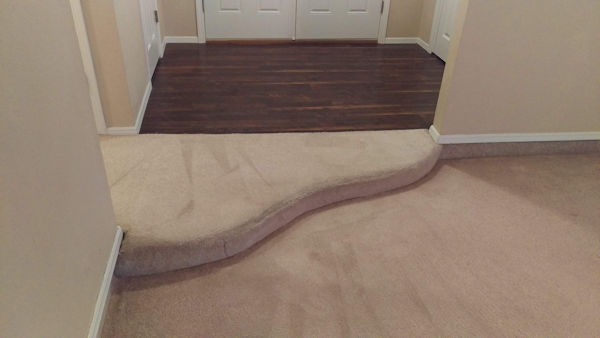 Speaker 1: (00:01)
Welcome to the carpet DM podcast. I am your host, Nathan Sabrina’s and we’re going to continue our talk about when to get better equipment to give you a better result. Carpet cleaning Tulsa since 1998 [inaudible] seven zero nine three or find us on the web at completetulsa.com so going back, we finished on the last one about a wand and a Teflon glide and how that can help to reduce the friction. I own the carpet to increase the suction to get a better, deeper clean, but also it re moves the fresher, the weight to needed to move the wall back and forth to reduce muscle fatigue so our technicians can stay sharp and fresh longer throughout the day and so that they are always being right on top of the work that they’re doing without having to worry about, wait, you’re tired, you’re sore, worn out. Tulsa’s highest and most reviewed Carpet Cleaner.

Speaker 1: (00:51)
Just can’t wait to get home. I mean, we all are going to feel like at some point because work is just work, but we would feel it much, much faster with a woman that does not have a glide. We have a really good equipment set up a machine and we spend quite a bit of money on building this machine. The bands and the clean with and those we want as simple to use as possible about what, you didn’t focus all your energy on cleaning the carpet. It’s not on operating and running the machinery. I think we’ve all had a lawnmower before where we, we’ve got that guy week. It wasn’t us. It was that guy across the street and you came out and you were decided to go wash your car and you get out there Washington to him. We pulled a lot more out and areas. Carpet Cleaner Tulsa since 1998.

Speaker 1: (01:31)
He’s got the law more out and you see him and he just starts to guess really. It’s like he’s in a rowing machine contest with that lawnmower and he just Pollstar Nope. Pollstar Nope. Pollstar Nope. Pollstar Nope. Okay. He’s just giving it all he’s got and he’d been pulling and he’s been pulling by NEC and looked down at and he’s like, ah. Those, his hands, the air frustration, and you realize that there’s no gas in the lawnmower. So you see him get in his truck, that was the gas can in the back. He drives over, comes back on like 2030 minutes later and he’s got gas at hand, pours it into the gas tank and now he’s back over there. He’s like, pull start. Nope, pull start. Nope. Hole start. Nope. Pull stark. Nope. And he starts slowing down and slowing down and slowing down. Tulsa’s highest and most reviewed Carpet Cleaner.

Speaker 1: (02:11)
Now he’s looking and thinking, what am I not Zoe? Just checking the rest of it. You see them looking at the dipstick and re throws his hands. They realize there’s no oil in there and it’s got a kill switch. It won’t start if there’s no oil in it. So it goes, he gets a quarter of oil and he pours it down in there. Now he’s got all the things that he needs in there and he goes back and tries to pull it again and finally it starts. But it just, he pulled it so many times it’s flooding, it’s always just blowing black smoke. It’s just barely stumbling along. And he’s just getting it. Finally get the blow up. All the extra gas gets started up, it gets rawer. Then, Oh, now it’s fully running. It’s fully roaring. You’re like, Ooh, you know, so we’re like at least a 45 we’re like power in on him. Carpet Cleaner Tulsa since 1998.

Speaker 1: (02:48)
Just getting a lot more started. Then he started to go across mow the yard. The yard is so thick because he’s waited for so long to mow it that as he goes across the, kills his mower like, Oh, it’s just more write downs. He pulls the deck out, gets all of the extra grass out from up underneath there. It goes over, starts it up again and it starts to go across. He goes a little slower this time it’s kind of leaving clubs. I finally realized, okay, this just isn’t going work out. He goes and he gets a bag, puts it on, he moves across, comes back into the bag, Mo’s across, comes back, empty the bag. Now a good, three hours later he’s finally finished mowing the whole yard. Now, let’s say that he had paid somebody else to mow the yard at, let’s just say it was expensive yard mowing at $60 to mow his yard. Tulsa’s highest and most reviewed Carpet Cleaner.

Speaker 1: (03:31)
It’s just a small front yard, but just $60 with going through and trying to get the lawnmower started with going to the store, coming back and forth, cleaning the deck and for going back and getting the bag and the bagging, all the leaf, you know, three hours later he’s paid himself $20 an hour to mow his own yard. Now he puts it by someone else and I guarantee you if that somebody else came to mow his yard, they will not spend 30 a three hours mowing that yard. They’ll probably spend 30 minutes and the reason they can spend 30 minutes is because they’ve got much higher quality equipment that is designed for perpetual and consistent use and they keep it maintained all the time and they spent a lot of money on is nice, zero turn mower was probably four or five grand for that mower and another five $600 in attachments and edging and et cetera. Carpet Cleaner Tulsa since 1998.

Speaker 1: (04:22)
But now he comes in, they start it up, it starts first try, it already has gas because they’ve spent the extra money just to always have gas on the truck and they get out there and they blow it and in 30 minutes they’re all done. Whereas he took three hours, so six times faster than what he would do. But it’s not just because they have the best equipment and they do, but it’s because they are ready for what it is. Sometimes cheap equipment can you use, there’s a cost to it. It’s a maintenance cost or a usage cost where it’s more difficult to get it started. It’s more difficult to use it. It’s not as powerful, so it won’t get as good of a cut. And so some of these things you have to figure out what’s the fighting defining moment. A lot of people out there have been doing it for a long time. Tulsa’s highest and most reviewed Carpet Cleaner.

Speaker 1: (05:03)
They’re very good. They’re good at their carpet cleaning experience, but they do not have good equipment, so they’re always going to be slow. Whereas you want somebody that doesn’t need to be fast. Speed does not mean you’re doing better, but it does mean that you can, the quicker you get finished with it, the quicker it gets to dry. So if it takes you three hours or four hours to clean the carpets and then at the end of that it then starts drying. The guy that finishes cleaning the house with good equipment in an hour or two just saved you two or three hours of dry time because he does not have to spend all that extra time cleaning the carpet and getting it wet or it could start drying again. We want to make sure that we do the deep clean and a thorough cleaning for the carpet cleaning, but also to make sure that we’re doing it in an efficient manner to where you don’t have to tie up half of your day waiting for the carpet cleaning guy to finish because remember with all carpet cleaning processes and all work that you have been done by other people as long as you were there. Carpet Cleaner Tulsa since 1998.

Speaker 1: (05:57)
Sometimes there’s not something else you can be doing. Sometimes being watch TV, sometimes they’ll get on a phone call, but for the most part you’re stuck there at the house just waiting for the job to be finish, finish your better, go on about the rest of your day. But until you get to that breaking point, then you are tied up there in that home. And so we try to make a both a good and efficient experience so that we can get a really good deep clean. Our technicians are alert and ready to go because they’re not getting worn out by using old difficulty equipment. Sort of like the guy who’s got the lawn mower that just won’t start. Uh, he’s so tuckered out more now, but, but by the time he gets to mow, mowing the yard, he’s already expended all of his energy, carpet cleaning Tulsa since 1998 we are complete carpet. Tulsa’s highest and most reviewed Carpet Cleaner.